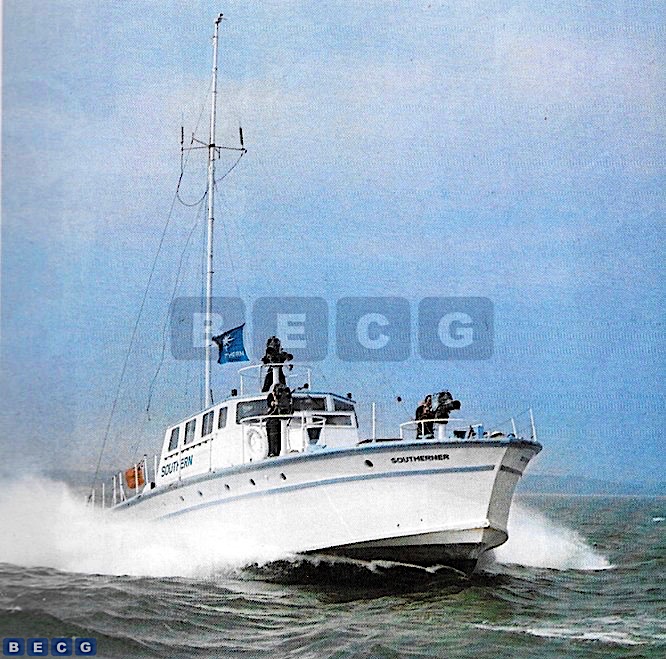 From the late 1960s through to 1981 (when they lost the broadcasting franchise for the southern region), ITV Southern Television was unique in the world in having a dedicated outside broadcast boat.

It was no ordinary boat, being an ex-World War 2 Proud Class Motor Torpedo Boat (MTB) fitted with a pair of Black Mamba Turboprop gas turbine engines, propelling her along at up to 34 Knots. Weighing in at 50 tons and at 70ft long, she was an impressive vessel, but it didn’t stop there.

Named ‘Southerner’, she was kitted out with two Marconi MkVII colour TV cameras, an Ampex VR1200 2” Quadruplex videotape recorder and all the radio links equipment to enable transmission of the live TV pictures back to the shore.

This was a powerful, but hugely expensive, production facility and Southern Television sought to use its capabilities whenever they could. She covered everything from the home-comings of famous yachtsmen Sir Francis Chichester and later, Sir Alec Rose, to Cowes Week, marine news events in the English Channel and even as part of the plot in their children’s TV adventure serial, ‘Freewheelers’.

With the loss of the franchise, the successor company, TVS, declined to take on this amazing resource and ‘Southerner’ became a tourist boat, eventually finding her way to Malta where she was scrapped in 2007.

Thanks to Michael Steele here is an article about the Pacific Glory fire (which is mentioned in the infographic above), plus a couple of layout diagrams for Southerner.

He even built a radio controlled model of Southerner complete with cameras!

In “Behind the Screen. The broadcasting memoirs of Lord Hill.” published in 1974, is a photograph of him on board Southerner.

Over on the “British Military Powerboat Team” forum there is a long thread concerning MTB506 (a.k.a. Southerner) and its eventual scrapping in Malta. It seems that there were plans to rescue it but they were never realised.