I’ve spent almost all of this weekend on YTTTV maintenance as she’s had none in such a long time.

END_OF_DOCUMENT_TOKEN_TO_BE_REPLACED 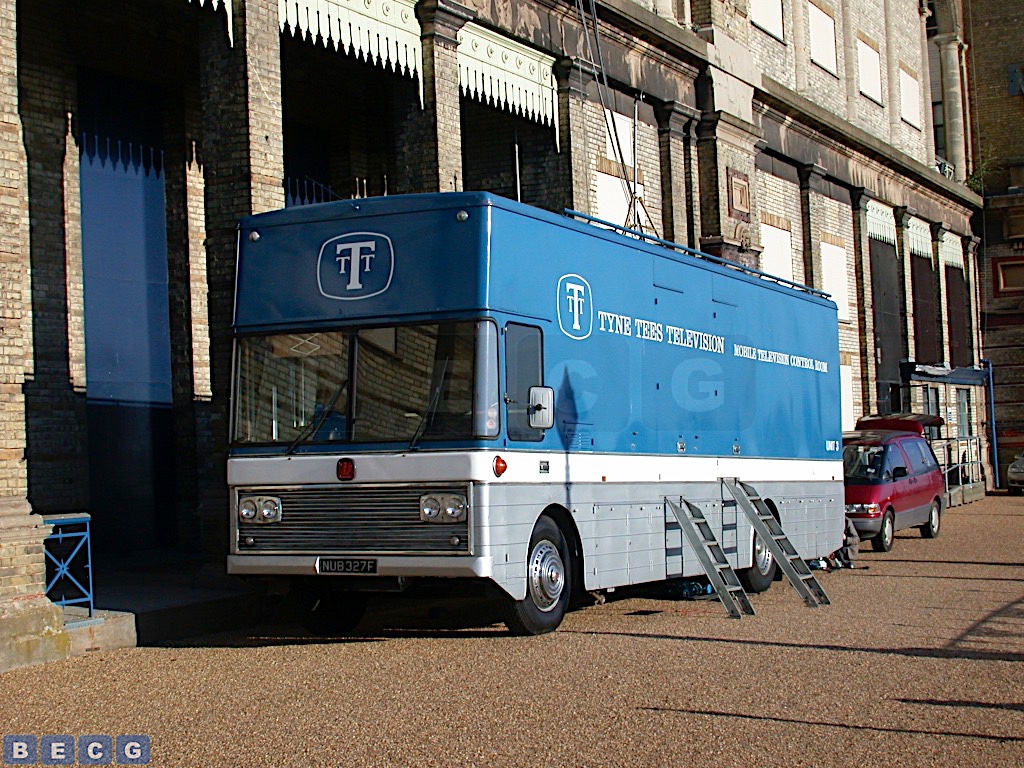 One of the “Yorkshire Twins” that opened their service in 1968 (literally, as the studios were not finished!). Sold to the Central Electricity Generating Board as a training video production vehicle, it was then acquired by Harefield Hospital Television, where we first set eyes on it. Fast forward twenty years to 2001 and it was decaying so we agreed to acquire it (largely complete) and preserve it. Now it’s in Tyne Tees livery, hence the odd name!

As part of their fleet they acquired two Marconi-built Outside Broadcast trucks of which NUB327F was one and we now know that the other was probably OUG632F (see this post). Originally painted in “Yorkshire Gold”, they were built in the Marconi New Street factory in building 720. The chassis is a Bedford KML and the bodywork (in corrosion resistant aircraft-grade duralumin) was done by RTS of Hackney.

Yorkshire disposed of this truck to the Central Electricity Generating Board (CEGB) who were wanting to make training videos, however this was too much for them to handle so they passed it on to Harefield Hospital Television who had much the same plans and came to the same grief; the equipment was just too old and unreliable. HHTV eventually used it as a store room outside their studios.

We visited it when it first arrived at HHTV and twenty years later when we were looking for spares for the Southern TV truck we contacted them. After an inspection showed it to be in remarkably good condition we agreed to purchase it from them assuming that they could get planning permission for a new storage unit, which they did.

So, in January 2001 we visited again, it was now emptied of “stores” but still had lots of equipment fitted, both original and “additional”. It was covered in moss and hadn’t been started for ten years, but a pressure washer, some new hoses, fluids, diesel, batteries and a large “battery boiler” coaxed it in to life and we drove away.

Disaster struck just as we were about to join the M25, the only hose we hadn’t changed (the thermostat hose) split and we lost the coolant. We were parked under the motorway junction bridge and the sign said “no parking” – the police came around several times but left us alone, the trail of coolant probably gave it away! A trip to a local motor-spares shop produced something that “would do” and we set off again.

After a good clean out we started to refit and repair equipment “as and when” time allowed. Most of the production areas were intact with the original Pye 14 inch preview monitors, the mixer had been replaced by a Marconi “MkVIII series” (incidentally, the original MkVII mixer is in the Southern truck!) but was working so it was left “as is”. We fitted a mixture of cameras and control gear to make a sort of “chameleon” rather than a strict preservation like the Southern truck.

Things were “pushed” along by a request for the truck to appear in the 2003 Christmas special of “The Royal” filmed in Scarborough, which was “Tyne Tees country”. So now it needed a paint job as it was still in CEGB red and blue with Harefield “hearts” on the front and side. A quick paint job and some decals supplied by the production company transformed the old Yorkshire truck into “Tyne Tees TV OB unit 3” and that is how it has stayed ever since.

Back to New Street

In 2005 we took the truck to the Marconi reunion at the sports and social club in Chelmsford and the designer was very pleased to see it again. Anglia TV attended with one of their small ENG satellite trucks and we went out live on “About Anglia” in the Anglia East sub-region.

The next day we obtained permission to take the truck back to New Street works and parked it outside building 720 where it was originally fitted out. Several ex-employees came to look and take turns sitting in the driving seat!

New: Here is the “About Anglia” report from the Marconi reunion:

In 2006, a special event took place at Alexandra Palace in North London to celebrate the 70th anniversary of the start of the BBC television service. We used the truck to make a programme using “vintage technology” – two Marconi MkIV cameras and one Marconi MkV camera cabled back to the truck which was parked on the terrace outside the studios. We had several working 405-line sets supplied by enthusiasts to display the programme live in the old transmitter hall and it was also carried by a local amateur television repeater.

Like the Southern truck we like to take “YTT” (as it has become known) out to various events:

By 2017 the “temporary” paint was beginning to show its age (especially as the vehicle is currently kept in the open) so a complete preparation and respray was carried out by a local company, with great success. We decided to keep the current colour scheme rather than returning to the original “Yorkshire gold”.

As stated above, we use this vehicle as a “chameleon” technology exhibition so it has several different types of equipment fitted. The current fit is:

A YouTube video made by Harefield Hospital Television when we visited the British Vintage Wireless event at Harpenden.

Simon Lloyd from Harefield Hospital Television has sent a link to an earlier video detailing the retrieval of the vehicle from Harefield. As you can see, it was in quite a state when we agreed to take it.