We have graciously accepted this gift and you can read about it on this page: BBC Radio Car, LT05XAN. 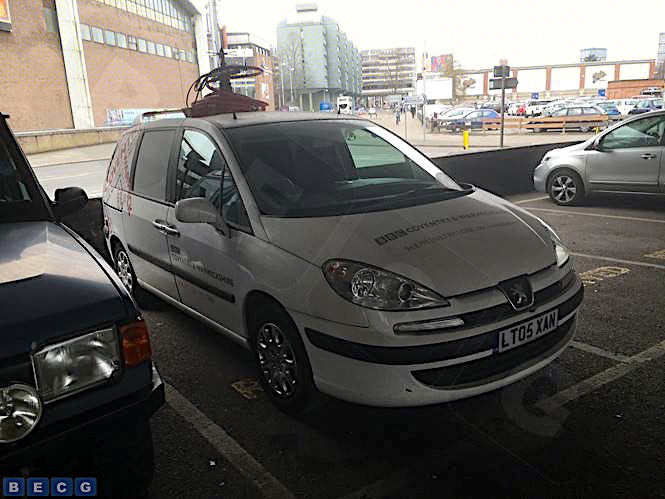 Paul did most of the design work for these Radio cars, which were replacements for the earlier Peugeot 806. Ten identical 807 based cars were built, by dB Broadcast.

It is complete with the mast and interior 19″ rack with some of the original equipment including power and control systems.

The picture above shows it in BBC livery, but it was re-sprayed into the original factory colour as a condition of sale by the BBC.

BECG has graciously accepted this vehicle as a gift, seen here being accepted by Paul Elkington on behalf of BECG.

Some more photos of the inside.

END_OF_DOCUMENT_TOKEN_TO_BE_REPLACED

Following on from Helen’s article A Rural Surprise, the National Transport Trust magazine Transport Digest have published a follow-up article about our Vivat re-creation.

END_OF_DOCUMENT_TOKEN_TO_BE_REPLACED

When we wrote about some of our outside broadcast (OB) trucks in the Winter 2019 Bulletin, we said a little about Vivat, our oldest truck, but this fascinating project deserves a closer look. It is a re-creation, as near as is technically possible, of an OB truck that was used at the Queen’s coronation on 2 June 1953.

END_OF_DOCUMENT_TOKEN_TO_BE_REPLACED

Dan Cranefield looks into the beginnings of location drama shot on videotape instead of film.

END_OF_DOCUMENT_TOKEN_TO_BE_REPLACED

After the war BBC Television Outside Broadcasts (Tel OBs) operated from their base at the Palace of Arts in Wembley, one of the substantial buildings which were built there specially for the British Empire Exhibition in 1924. Some of these buildings were put to other uses later on.